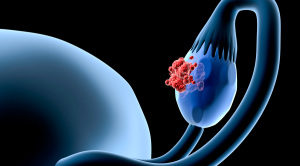 In a stunning breakthrough, Dr. Martin Widschwendter recently described a blood test that can find early ovarian cancer, potentially helping to save numerous lives. As published in the December 22, 2017 issue of Genomic Medicine (https://genomemedicine.biomedcentral.com/articles/10.1186/s13073-017-0500-7), Widschwendter has demonstrated that screening for abnormal fragments of altered DNA in circulating blood can find ovarian cancer up to two years before it is otherwise clinically detectable.

In this report, Dr. Widschwendter and colleagues at University College London first found multiple altered (methylated) DNA fragments common to many tumor samples from high grade serous ovarian cancers – the most common form of ovarian cancer. They then confirmed the presence of the three most sensitive and specific markers in the blood of those patients.

They then evaluated banked samples of blood from 200,000 women, some of whom subsequently developed ovarian cancer. Evidence of altered DNA was commonly found up to two years prior to the time that they were subsequently diagnosed.

The investigators also compared the utility of this new test with the current standard test, CA-125, and found that the DNA-based test was far superior. Lastly, they found the DNA test accurately predicted who responded to chemotherapy and who did not, again in a manner superior to the standard CA-125 test.

This is a similar technology to the Cologuard test for colon cancer; first approved by the FDA in 2014, Cologuard is a non-invasive alternative to colonoscopy which looks for altered DNA in stool to screen for colorectal cancer. Another similar technology is also currently used in obstetrics, where screening for cell-free DNA in maternal serum can find genetic anomalies in the fetus such as Down’s Syndrome.

This test is not currently available to patients. If further validated, we hope this will graduate from the research arena to the bedside in the near future. Stay tuned.